October 6, 2015 · by Gina Quinn · in About, Insomnia, Obsessively-Compulsive in a Mad Mad Mad World, On Faith, Uncategorized 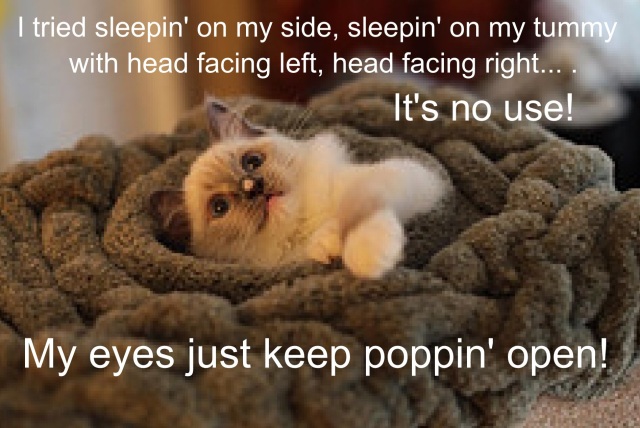 It’s very frustrating. After forcing myself to go to bed before midnight for the last three nights, I made the mistake of taking a nap around 9 this morning, because I had been up since 3:30 am, when my husband’s alarm went off. The problem is, after sleeping a respectable 5 1/2 hours last night, I ended up sleeping until 1:30 in the afternoon!

I know that 5 1/2 hours isn’t what sleep “experts” recommend, but that many uninterrupted hours of blissful slumbering constitute a comparatively “good” night’s sleep for me, when my typical average is only 4 hours at night, with an additional daytime “nap” of 4 hours.

I’ve had trouble sleeping for my entire life. According to my mother, I was still waking up for nighttime feedings well into my second year of life! By then, she had a second child and had to juggle bottle feedings for the two of us, often simultaneously.

As long as I can remember, literally, I would wake up at night. When my parents would argue, I remember waking up to hear the shouting, and the slam of the outside door, as my father would storm out into the backyard, to do some mechanical work on a vehicle someone had dropped off. The house would be suddenly quiet, except for the muffled sounds of my mother crying, as my siblings slept, blissfully unaware.

I wouldn’t dare to get up, so, I’d lie there in my dark bedroom, waiting for my mother to stop crying, only to doze off, never knowing how long it went on…never hearing my parents make up—or, knowing whether they ever did.

When I attended school, I burned the midnight oil every night—and most of my weekends—studying long hours to maintain my straight-A status. I would make meticulous outlines, arranging information in a way that made sense to me, never actually “studying” until the night before a test.

My method of studying was very effective, but also very stressful for me. I felt intensely pressured to remember everything. I’d lie awake, night after night, going over every detail in my head. On top of that, I’d also dredge up, and try to solve, every problem I could think of.

One big problem area for me was peer conflicts. I had elected myself the leader of the “out” group, as a defense against feeling “less than” the members of the “in” group. I was from a large family, so money was tight, and I felt shy around those who could afford all the latest clothes and gear, and whose parents bought them shiny new cars. I couldn’t compete there.

But, I was also friendly, empathetic, academically smart, and fairly pretty. So, I simply refused to cower or just blend into the crowd.  I competed in what I perceived to be my strength areas. I also took it upon myself to defend others from the snooty attacks dished out to some of my peers. It took guts, which I could muster, with extreme effort, during the day. But, at night, my mask was off and I felt very vulnerable—very alone, and very sad. I’d lie there pondering the meaning of life and my place in it.

In college on a full academic scholarship, my penchant for procrastination mushroomed, in spite of beginning each semester with the best of intentions. Countless nights were spent, frantically preparing for mid-terms and finals. I once stayed up for 3 1/2 days, painting non-stop.

As a teacher, I always felt compelled to individualize my lessons for each level of academic ability in my classrooms. It was a lofty, but impossible, goal. That fact didn’t stop me from trying, though. Hours upon hours of preparation time meant that most nights I only slept about 4 hours, going to bed exhausted, and yet, at the same time, tormented with the feeling that I should be doing more. I’d lie in bed, fretting, and planning, and fretting some more. I loved teaching, and I loved the kids, but the pressure  was unbearable.

Getting by on such little sleep meant that I also had a problem with getting to work on time. Day after day, year in and year out, job after job, I’d squeak in, sometimes seconds before the time clock struck the time I was due at my various posts.

Once, when I worked at a plastics factory, I flew into the parking lot, pulled up to the employee door, jumped out of the car (which I left still running), and ran into the building, just in time to see the previous shift beginning to clock out. It was 8:00, on the dot. I had to punch in before the minute hand clicked again. I dove for the line of weary workers, who graciously parted their line to let me get to my precious time card. But, alas! It was not to be.

For some reason, my time card was hidden behind someone else’s card that morning. That had never happened before, and it never happened after that. But, it was no use. That rude minute hand defiantly clicked 8:01, sealing my fate: I was now tardy for the second time within three months. A third tardy would get me three days off. I was so ashamed!

But, do you think for one minute that I stopped being tardy? Nope! The three months recording period was about at an end. I just used super-human effort to be on time until that quarter ended, sleep or not. Some shifts, I had to go to work without any sleep at all, just to be sure I’d not sleep through my alarm. Then, the next quarter’s struggles began. More pressure!

There is now also a “fear factor” added to the mix.  You see, my mother died in her sleep, and since I am a shallow breather, especially at night, this is a concern to me. Also, at 64, I sometimes lie down or wake up with a lot of pain in one area of my body or another. I’m pretty sure that a lot of people, including me, in their sixth decade of life and beyond, wonder whether they will wake up the next morning in their bed, or in “The  Beyond.”

It’s been said that writing is cathartic. I can definitely see, from the way that this post has evolved (between 2 and 4 am), that my reasons for having a problem with insomnia have deep roots. Yet, that doesn’t mean that my problem is insurmountable. My efforts have been relatively powerless to change my sleep pattern. But, I have faith that God is able to, and will, give me the victory over this.

Tags: faith, funny cats, geriatric topics, how a Christian deals with insomnia, insomnia
← Jill of All Trades (or How to Turn Manic Depression and A.D.D. into a Plus)
Carson versus Trump →